Resources exploring how news and current affairs is reported to a global audience through social media and traditional means. An explanation of misinformation and disinformation, fake news, fake images and videos, verification and debunking.

Advances in artificial intelligence could soon make creating convincing fake audio and video – known as “deepfakes” – relatively easy. Making a person appear to say or do something they did not has the potential to take the war of disinformation to a whole new level.

Newspapers (print) Newspaper, publication usually issued daily, weekly, or at other regular times that provides news, views, features, and other information of public interest and that often carries advertising. Nearly all the world’s major newspapers began publishing online editions of their newspapers in the early 21st century. (Encyclopedia Britannica)

Facebook: Facebook is the largest social network in the world, with more than 2.45 billion active monthly users. News sites have their own Facebook accounts and Facebook deliver news via its Facebook News tab. It will use human editors and algorithms to determine what shows up in your feed.

Television: news broadcasts on Australian television began in 1956 with the advent of television. The ABC is the only station with a dedicated news channel (24) that began in 2010. 66% of consumers turn to TV news broadcasts for their news.

Radio: Most radio programming maintain a news bulletin at the top of the hour but news and current affairs programming is gradually disappearing and only 37% of Australian consumers use radio as a source for news.

News sources used by consumers in Australia as of February 2019 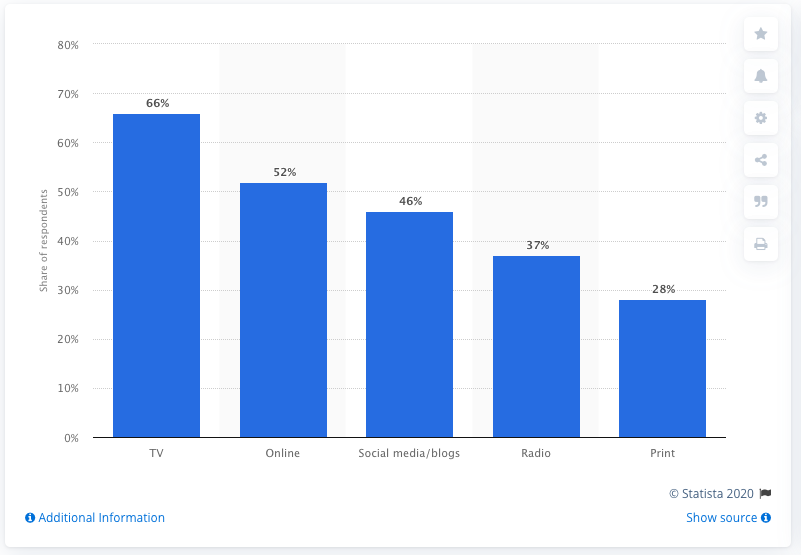 Trust in digital news sources versus printed sources In the same year, the level of trust Australians place in their main news source was around 50 percent; notably, newspaper readers had a higher level of trust with 56 percent, than those who obtained news online, with 44 percent. Whilst most newspaper consumers trust them as a source of news, around a quarter said they distrusted the publications. The level of trust that social media companies will ensure that content on their respective platforms is factual is also low, particularly during times of crisis. Just nine percent of Australians strongly agree that social media companies will ensure content is genuine.

Bias: a feeling or opinion, especially one that is preconceived or unreasoned.

Click bait: Sensational headlines to attract readers to a webpage with intriguing but uninformative previews

Fact-checking site: authoritative sites such as ABC/RMIT Fact Check where researchers check statements and information published by politicians and public figures as to their truthfulness

Source: where the information has originally come from. This could be an author, journalist, or news outlet such as the ABC or Channel 7.

Sponsored Content: this refers to information put out by a company wanting to make money such as Coca-Cola. The site has been paid by the company to include information about the product which may or may not be true.