Resources to support the study of natural disasters in the Asia Pacific Region.

The movement of the plates, and the activity inside the Earth, is called plate tectonics.

Today the earth is generally considered to have 15 major plates, 7 or 8 of which are primary plates and the others are smaller, secondary plates.

Play with the interactive map to see the world's tectonic plates and the distribution of earthquakes and volcanoes.

Explore how plates move on the surface of the earth. You can change temperature, composition, thickness, types and movements of the plates. Discover how to create new mountains, volcanoes, or oceans! 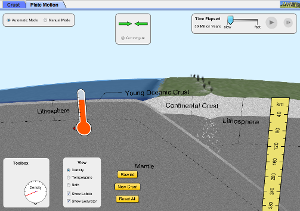 The following animation explains the motions of three types of plate boundaries.

When an oceanic plate collides with a continental plate, the denser oceanic crust gets bent and subducted beneath the lighter and thicker continental crust. This forms what is called a subduction zone. As the oceanic crust sinks, a deep oceanic trench, or valley, is formed.

The magma formed at a subduction zone rises up toward the earth's surface and builds up in magma chambers, where it feeds and creates volcanoes on the overriding plate.

A subduction zone is also generated when two oceanic plates collide - the older plate is forced under the younger one - and it leads to the formation of chains of volcanic islands known as island arcs.

Since the collision and subduction of plates is not smooth, earthquakes are result from this type of interaction. Earthquakes generated in a subduction zone can also give rise to tsunamis.

An example of this mountain-building process is the Himalayan range in southern Asia. Containing the highest mountain peaks in the world and traversing the modern-day countries of India, Pakistan, China (Tibet), Bhutan, and Nepal, the Himalayas were formed by the collision of the Indian and Eurasian Plates. This process began after the breakup of Pangaea, when India became an island continent and began traveling northward toward Asia. The island of India slammed into Asia about 40 to 50 million years ago near modern-day Tibet, crushing and folding the plates to form the Himalayan mountain range.

Divergent boundaries in the middle of the ocean contribute to seafloor spreading. As plates made of oceanic crust pull apart, a crack in the ocean floor appears. Magma then oozes up from the mantle to fill in the space between the plates, forming a raised ridge called a mid-ocean ridge.

When two continental plates diverge, a valleylike rift develops. This rift is a dropped zone where the plates are pulling apart. As the crust widens and thins, valleys form in and around the area, as do volcanoes. Early in the rift formation, streams and rivers flow into the low valleys and long, narrow lakes can be created. Eventually, the widening crust along the boundary may become thin enough that a piece of the continent breaks off, forming a new tectonic plate.

Transform boundaries and the resulting faults produce many earthquakes because edges of tectonic plates are jagged rather than smooth. As the plates grind past each other, the jagged edges strike each other, catch, and stick, "locking" the plates in place for a time. Because the plates are locked together without moving, a lot of stress builds up at the fault line. This stress is released in quick bursts when the plates suddenly slip into new positions. The sudden movement is what we feel as the shaking and trembling of an earthquake.